In 2020 as the coronavirus turned the world on its head, one Western Queensland family was left scrambling. Beef producers Karen and Dan Penfold had spent a year educating and building a relationship with their first international wholesaler, hoping this was going to offer their family the financial security needed for the next generation.

This wholesaler was based in Wuhan, the epicentre of the coronavirus.

It’s not the first time the couple had faced adversity, with the structure of the current “breed then feed” business model borne from drought.

The Penfold family, Dan and Karen Penfold and their daughters Bonnie, Molly, Jemima and Matilda, breed, trade, and raise cattle on their properties Old Bombine and Mamaree near Meandarra, more than four hours west of Brisbane. They also have “Bellevue” at Yaraka, almost nine hours away and a fourth property “Woodlawn” at Talwood just 80km from home.

Across the four properties, the family breed Black Angus and background these along with a mix of flat back cattle Dan buys in which are for their main domestic market. All cattle are then finished on two feedlots, averaging 9000 head turnover each year.

Mamaree is where Dan grew up and when he met Brisbane girl Karen, she was happy to make the move to the property, which later became their own.

About 25 years ago drought pushed the Penfold family into what became a highly successful feedlot model at a time when feedlots weren’t that common beyond drought conditions.

“It was a drought strategy way back then, and from there we have continued to feedlot and look for new markets,” Karen explained.

Already selling to a large supermarket chain and to the domestic market, in 2018 Dan met a Chinese couple at Beef Week in Rockhampton, interested in buying 150-day grain fed head of Angus and “from there the crazy journey of the branded beef expedition began”.

With their four daughters passionate about continuing the legacy on the family property, it was only natural to name the premium beef product, Four Daughters.

Karen and Dan first hosted the Wuhan couple in 2018, when they came to the property and began educating them on beef.

“They turned up with the (AUSMEAT) Handbook of Australian Meat and they wanted this cut and that cut. We had to say, ‘hang on, we are not butchers, when you grow cattle you don’t sell cuts of beef’,” Karen said.

It was a steep learning curve, which included a trip to Wuhan in 2019, learning about exporting, shipping, the cuts the Chinese market wanted and negotiating price before the first shipment left in April 2019.

“It was just an opportunity for us. If an opportunity arises we are prepared to have a crack at something. It was a chance to enter a new market and to grow our business. We were prepared to try as we have four daughters who want to stay on the land. If we want to achieve successful succession we need to expand.”

In December 2019 the Penfolds heard about the coronavirus through their WeChat communication with the wholesaler, but the impact wasn’t felt until the new year when the virus shut down China. The worst was yet to come, with the situation further exacerbated by China’s ban on imports from some Australian abattoirs.

The Penfolds had been using their Four Daughters brand locally to sell the rumps the Chinese market did not want, but the brand’s presence wasn’t enough to take on the losses they were feeling from the fallout.

With 800 cattle on feed intended for export, the family had to think fast and this started with building their name so their premium product could be sold domestically.

Under the Four Daughters brand the family introduced an authentic paddock-to-plate concept where they hand delivered their premium beef in branded boxes to people in south-east Queensland, which has now expanded interstate. 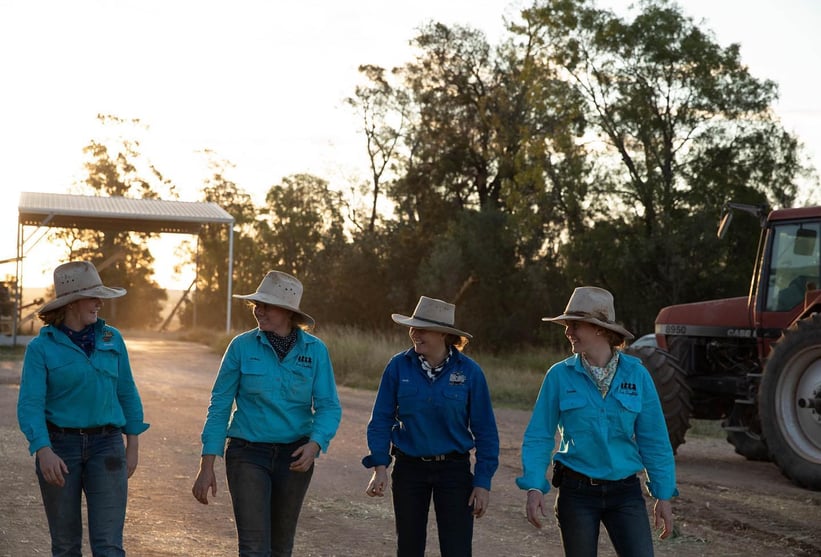 “I am a school teacher and our passion has been about education, so we aren’t sure where our beef box journey will go but if we help educate people in the city and build country city connections, then that’s a powerful tool we have,” Karen said.

While balancing full-time university study with work on the family properties, 21-year-old Molly has enjoyed sharing their story and talking to people about life on the land.

“Most of the deliveries of beef are a special experience, as you get to meet people who have never met a farmer before,” she said.

“Customers ask what our daily lives are like, how many cattle do we have, do we name them.”

The Penfolds have tentatively started exporting to China again and there’s a trial into Vietnam, but with the flexible and innovative approach Karen and Dan have used to allow the fourth generation to take over, it’s no wonder this mindset has been translated to their daughters, who are building a diverse skill set between them.

Eldest Bonnie has finished her primary teaching degree and works three days at two small schools, but can be found working at home the rest of the time.

Molly is in her third year of her accounting degree, completing this externally so she can also work at home.

Jemima is working for a family on their cattle property north of Cloncurry as part of her second gap year, looking forward to making the return home next year with a swag of new skills and intentions to develop her knowledge in animal nutrition or business.

Matilda is in the midst of year 12 while also completing her Certificate II in aircraft line maintenance. COVID halted her training to gain her pilot’s licence, but she plans to pursue skills in helicopter engineering or diesel mechanics.

“They are all very hands on. Every day they get up to feed cattle, unload hay trucks, weld or service machines,” Karen said proudly.

“They’ve just been a part of our daily routine. Dan has treated them exactly as you would a boy, it’s irrelevant they are a girl.”

With such diversity in their skill set, underlined with a genuine passion for the land, the future looks bright for the Four Daughters legacy.